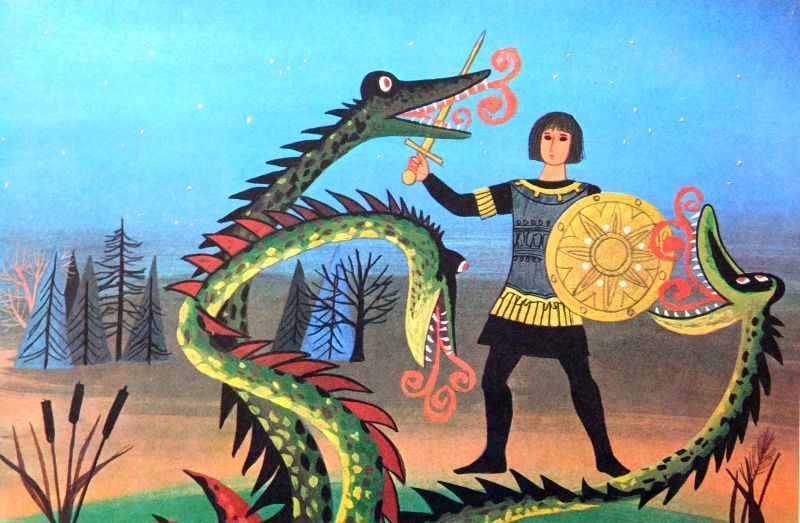 A king had three sons and three daughters. On his deathbed he made his sons swear that they would marry off their sisters to the first person who asked. When one night a booming voice demanded that one sister be given to him, the two older brothers were reluctant, except for the youngest (the Least of Three) who heeded his father's dying request and handed her over. The same thing happened for the next two nights, until all the sisters were given away to mysterious strangers. The three brothers decided to go and search for their sisters to find out where they were.

Throughout their travels, they fought many-headed serpents; in addition, the youngest brother used his wits to defeat nine giants that were terrorizing the region; finally he saved the king's daughter from a snake bite. Because of all this, he is allowed to marry the princess and becomes one of the king's favorites. He lives in her castle and is allowed to visit any of the rooms, except one which was bound with chains (the One Forbidden Thing). When his wife was absent one day, he went inside and saw a man held prisoner and bound by chains. The man called himself Bash Chelik, and he begged for three glasses of water. Every time he complies he gets an extra life. When the third glass is handed it to him, the man suddenly gained his massive strength, broke the chains, opened his wings, and flew away with the youngest son's wife.

Now the prince sets out on a new quest to rescue his wife. On the way, he discovers that his sisters were married to the Lords of Dragons, Hawks and Eagles. He tries to get his wife back three times, each time losing a life that Bash Chelik gave him for the glasses of water. On the fourth time he fails again and dies, but his body is saved by his brothers in law, and they resurrect him using the magical water from River Jordan. At this point the prince's wife learns that Bash Chelik cannot be killed, because his life is in a bird that is in a heart of fox in forest of a high mountain. Helped by the Lords, the prince finally slays Bash Chelik and rescues his wife.