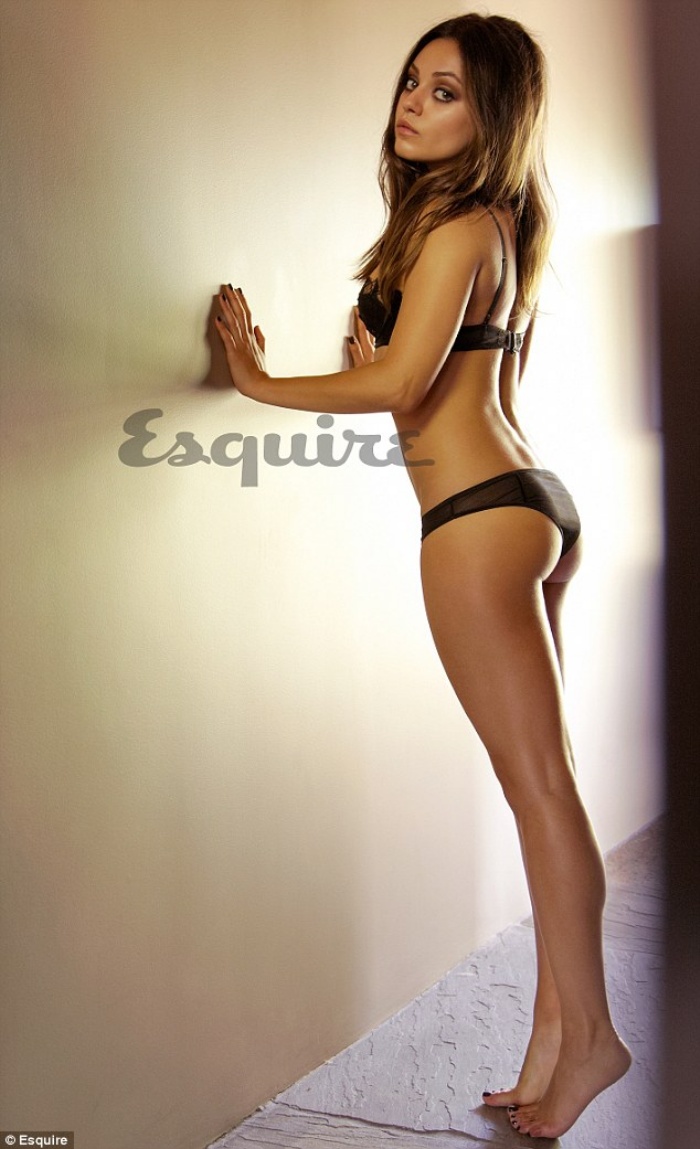 The talented Milena "Mila" Markovna Kunis was born in Chernivtsi, Ukraine, USSR (now independent Ukraine), to a Jewish family. Her mother, Elvira, is a physics teacher, her father, Mark Kunis, is a mechanical engineer, and she has an older brother named Michael. After attending one semester of college between gigs, she realized that she wanted to act for the rest of her life. She started acting when she was just 9 years old, when her father heard about an acting class on the radio and decided to enroll Mila in it. There, she met her future agent. Her first gig was in 1995, in which she played a character named Melinda in Make a Wish, Molly (1995). From there, her career skyrocketed into big-budget films. Although she is mostly known for playing Jackie Burkhart in "That '70s Show" (1998), she has shown the world that she can do so much more. Her breakthrough film was Forgetting Sarah Marshall (2008), in which she played a free-spirited character named Rachel Jensen.

Has one brown eye and one green eye

Mila and her family moved from Ukraine to Los Angeles, California when she was age 7. Her father Mark is a mechanical engineer. Her mother Elvira is a physics teacher. Her brother Michael is a biochemist.

Met her manager at the Beverly Hills Studios (an afterschool acting class). Her father enrolled her there when she was nine.

Missed her senior prom because of a scheduling conflict.

Auditioned for "That '70s Show" (1998) at age 14. Though actors had to be at least 18 to get the part, she truthfully claimed she would be 18 on her birthday, not specifying which birthday, and won the role.

Terrified of bugs so much that during her May 2004 appearance on "Late Night with Conan O'Brien" (1993), she ran offstage when the Bug Man appeared after her interview.

She and Laura Prepon were often filmed sitting down for their scenes on "That '70s Show" (1998) because Laura is seven inches taller than Mila. In other scenes, Mila wears platform shoes to give her four extra inches.

She is a fan of the rock band Aerosmith.

At age 9, Mila started to take afterschool acting classes at the Beverly Hills Studio. At one of the Studio's public showcases, Mila was approached by entertainment manager Susan Curtis, who offered to make her a client.

Mila's best friend was Maria Osadchy when she was younger, an Aries whom she met in 2nd grade. Maria is Russian and helped Mila learn English. In an interview, Mila had Maria with her and talked about how they spent the night together on the weekends.

Her favorite movie is Prljavi ples (1987) and her favorite television series is "8 Simple Rules… for Dating My Teenage Daughter" (2002).

The shark-tooth necklace she is wearing in Forgetting Sarah Marshall (2008) is by Pade Vavra Designs.

Is a fan of the famed MMORPG World of Warcraft.

The nude pictures of her in Forgetting Sarah Marshall (2008) were not real, according to the film's director, Nicholas Stoller.

She and actress Sarah Michelle Gellar have a special credit in every episode of "Robot Chicken" (2005).

Mila and Macaulay Culkin were on vacation in Israel in 2006 when a war broke out between Israel and Hezbollah in Lebanon. They flew out of the country and back to the United States; Mila later stated that they were never in any danger from rocket fire.

On the television show "Loveline" (1996), she mentioned that when she was younger, she had serious migraines that were caused by an eye condition. She had to insert steroid injections straight into her eye.

In January 2011, Mila said that she was blind in one eye due to a condition called chronic iritis. She underwent surgery to correct the blindness.

Was invited via YouTube on July 7, 2011 to a United States Marine Corps Ball in Greenville, North Carolina by Sergeant Scott Moore. At the time of the Internet invite, Moore was stationed in Musa Qala, Afghanistan with the 3rd Battalion 2nd Marines. Kunis' Friends with Benefits (2011) co-star Justin Timberlake came into contact with Sergeant Moore after seeing his video and then contacted Kunis about the invite. Kunis accepted the invite on July 12, 2011.

She and her ex-boyfriend, actor Macaulay Culkin, were close friends with Michael Jackson and his family for many years until Jackson's death. Culkin is godfather of his children. Kunis attended a private funeral for Jackson on September 3, 2009, with Culkin.

In a relationship with Ashton Kutcher [2012-present].

One of her favorite television series is "Dekster" (2006).

Blondes definitely do not have more fun. Trust me.

[on her "That '70s Show" (1998) character, Jackie Burkhart, switching boyfriends from Michael Kelso to Steven Hyde]: I think her relationship with Steven has taught her to be less selfish.

[Denying false reports of marriage]: I've been engaged, I think I've already been married, And I'm sure I have a child somewhere. I'm waiting to have something else happen. No, I'm not married. And, no, I'm not engaged. And, no, I do not have a child. No one seems to listen. And next week I'll be engaged again. I think, at one point, they were like, "Seen shopping in Beverly Hills for engagement rings." We were in Japan working. What is wrong with these people? Half the time you can say they misconstrued facts. But, more often than not, they just make stuff up.

Well, I was born and grew up in Russia. I wasn't allowed to be religious. My whole family was in the Holocaust. My grandparents passed [away] and not many survived. After the Holocaust in Russia, you were not allowed to be religious. So my parents raised me to know I was Jewish. You know who you are inside. You don't need to tell the whole world. You believe what you believe, and that's what's important. And that's how I was raised. My family was like, "You are Jewish in your blood." We can celebrate Yom Kippur and Hannukah in Russia — but not by the book. We do it to our own extent because being in Russia… Bar Mitzvahs weren't held. When I was in school over there, up until I was seven, you would still see anti-Semitic signs. One of my friends who grew up in Russia… she was in second grade… and she came home one day crying. Her mother asked why she was crying and she said on the back of her seat there was a swastika. Now this is a country that obviously does not want you. So my parents raised me Jewish as much as they could and they came to America. I love my religion. I think it's a beautiful religion, but I took parts of it that I want for myself. I don't need to go to temple. I will, but I don't need to.

I started acting when I was nine as a hobby because it was fun and I could get out of school. I didn't ever think that I would have it as a job because I didn't know you could have a job in acting. But now I really love what I do and I can't even imagine doing anything else.

No strings sex is great in theory but falls short in execution. You can't sustain a friends with benefits relationship for a long time. It's inevitable it will either go one way or the other. I have plenty of males who are my friends… Without the benefits. If you're friends with someone, let's just leave it at that. There needs to be nothing more.

I think than an actor is more likely to be forgiven in the public's eye than an actress. There will always be a double standard between males and females, so I think that an actress is more likely to protect her public persona, so to speak, than an actor would be. An actor goes crazy in a hotel room, gets trashed, throws a bench, breaks a window, and he is considered a rock star. An actress does that and she's sent to rehab and is thought to have problems and issues and can't get a job.

I think the second you think that you're funny is when you stop being funny.

Where Are They Now