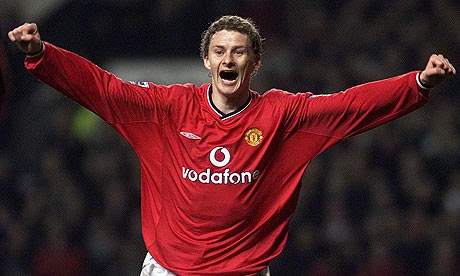 Ole Gunnar Solskjær (born 26 February 1973) is a Norwegian former footballer, who spent most of his career playing for Manchester United, mainly as a striker, but also as a winger. He is now a football manager, currently in charge of Molde.

Before his arrival in England, Solskjær played for the Norwegian clubs Clausenengen and Molde. He joined Manchester United in 1996, for a transfer fee of £1.5 million. Nicknamed "the Baby-faced Assassin", he played 366 times for United, and scored 126 goals during a successful period for the club. He was regarded as a "super sub" for his trait of coming off the substitute bench to score late goals. Solskjær's defining moment in football came in injury time of the 1999 UEFA Champions League Final, where he scored the winning last-minute goal against Bayern Munich, completing a remarkable comeback and winning The Treble for United.

In 2007, Solskjær announced his retirement from football, after failing to recover from a serious knee injury.[1] However, he remained at Manchester United in a coaching role, as well as in an ambassadorial capacity. In 2008, Solskjær became the club's reserve team manager. He returned to his native country in 2011 to manage his former club, Molde, whom he led to their first ever league trophy in 2011 and a second league trophy in 2012.

He also supervises a training academy for young footballers in his home town of Kristiansund, and is a patron of the Manchester United Supporters' Trust (formerly Shareholders United).